The Dover Fire Department recently acquired its first four-wheel drive ambulance and has added a new plow to its brush truck—both critical for runs made in severe weather. Purchased for approximately $200,000 last summer, the ambulance features a four-wheel drive Dodge truck chassis—much stronger than the previously purchased cutaway van chassis. The new unit is expected to run for 16 years as both a frontline and reserve response vehicle. Previously purchased ambulances are only used for 10 years. “The department can expect a longer service, so the amortized cost is actually lower per year,” said Dover Fire Chief Russell Volkert. “These are investments in our citizens’ safety and protection.” As with all ambulance service costs, the Dover Fire Department purchased the new ambulance utilizing ambulance fund revenue. The brush truck plow was purchased by Dover Township to help the fire department get to residents in need of EMS, Fire or Rescue services. 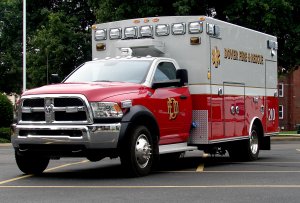